Halos around objects in HDR photographs have been a problem seemingly since the start of HDR. We often see halos (bright areas) around trees and buildings especially against a blue sky or any smooth gradient. I’ve noticed with Photomatix 5, especially using the Contrast Optimizer tool, that there are reverse halos. Mainly dark areas in the sky where in the past there might have been a halo. This used to be present in previous versions but most images were more apt to show bright halos rather than dark halos or maybe a better term would be smudges. 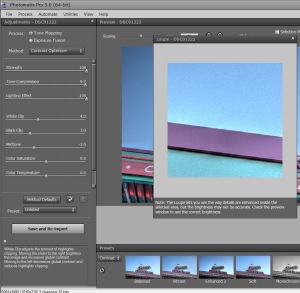 You can see dark smudging in the teal part and also smudging in the blue sky. The Contrast Optimizer preset is awesome but can cause these artifacts due to the extreme settings.

To minimize this you can turn the Strength slider down to 70 and the Lighting Effect slider to 70 as well. You still get a vibrant scene but with less artifacts. You still have the option of adding more Clarity in Lightroom, tweaking in Color Efex Pro or choose your favorite program for more targeted local contrast enhancements.

Changed the Contrast Optimizer settings of Strength and Lighting to 70.

Notice the smudges are mostly gone. Some people may not have a problem with these artifacts at small sizes. If you print at larger sizes or use as desktop wallpaper these artifacts can become really noticeable and distracting.

In the future I’ll show how you can use the radial filter in Lightroom to minimize halos and also a layer blending technique to remove it altogether.